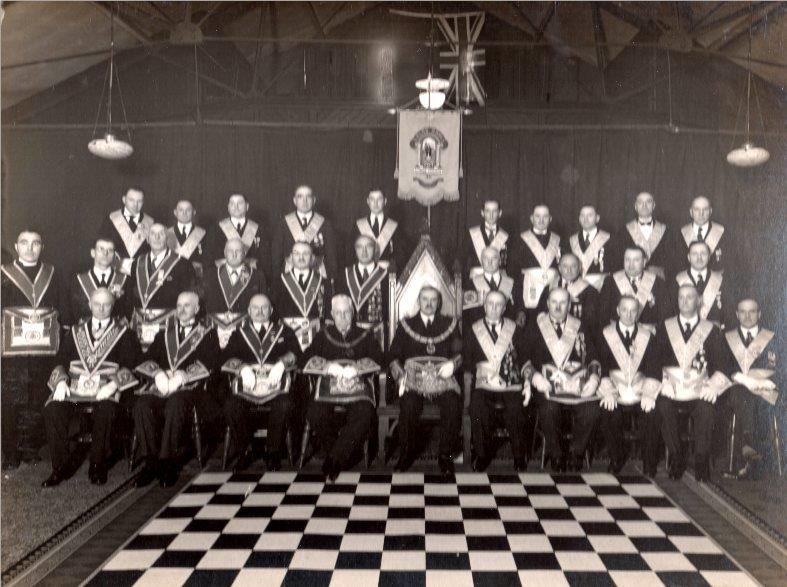 Back Row (left to right )

The Lodge originally met at the Masonic Rooms in the Old Drill Hall, Grammar School Lane, Halesowen. The first meeting in the Masonic Hall at Newfields, the present venue, was held on Thursday 10th October 1935.

During the early meetings there was much enthusiasm amongst the members with many propositions. This produced  many Initiations and young members, thus rapidly increasing the strength of the Lodge. Consequently, by necessity, at the 4th Regular Meeting, held on Thursday 14th December

1935, the Lodge was opened at 4.35pm, a ballot was taken and proved in favour of four Candidates for Initiation.

The Ceremony that followed consisted of two Candidates being Raised. The Lodge was called-off and after a 20 minute interval, called-on and the evening continued with a joint explanation of the Traditional History.

The evening was concluded with a double Initiation with the Lodge finally closing at 8.20 pm. Total time was 3 hours 45 minutes, a far cry from the present tendencies in the craft.Of the Founder Members, the late W,Bro. J H Wainwright., P.P.S.G.W.,  was the first Assistant Secretary of the Lodge and the 5th Worshipful Master Installed the 6th May 1938, subsequently to be the first Honorary Member duly appointed in January 1986.

The first Past Master’s Night was held on Thursday 14th January 1937.

Extracts from the first Minute Book commencing on 11th May 1933 and ending on 13th April 1944 were made and vouched for by W.Bro. S.H.Davis and some of the salient points are:-

Thus 49 brethren have been initiated into the Lodge and there have been five joining members.

The Minute Book covering 97 meetings - 87 Regular, 9 emergency and 1 special. The special meeting was held to consider moving the Lodge from the Old Drill Hall to the New Masonic Hall, October 1935.

The nine emergency meetings were held to expedite the completion of candidates degrees so that successive Masters should not have an accumulation of ceremonies to undertake for their Predecessors in Office.

King George VI was invested as Past Grand Master

The Grand Master H.R.H. The Duke of Kent was killed on active service and was succeeded by the Earl of Harewood.

A Lodge of Instruction was formed in 1933 and has functioned ever since.

At the Installation Meeting on 10th May 1945, it was proposed and carried that the meetings revert to the dates in the Bye-Laws.

In the ensuing years of 1944/45/46 it was still common place for two ceremonies to be performed at a Meeting which often lasted up to three hours, this enabled the Lodge to have a rapid growth in strength.

In February 1946 the Worshipful Master drew the attention of the Brethren to a communication from Grand Lodge regarding the correct dress to be worn and requested the brethren to attend the Lodge in dark clothing, this practice having been relaxed somewhat during the war years due to clothes rationing.

On the 9th May 1946 the petition for the formation of our daughter Lodge, Wernleigh Abbey Lodge No 6386 was signed at the Installation Meeting.

The Lodge settled to a steady pattern over the ensuing years and for the first instances of Lectures on the Summons on a Regular Lodge night occurred in 1952.

The Silver Jubilee of the Lodge was celebrated on the 8th May 1958 at the Installation of the then Brother Wilfred Alan Kimberley.

In the last 25 years, Halas Abbey Lodge has undertaken its Masonic business in regular pattern, the initial need to perform multiple ceremonies at regular meetings diminished, A second daughter Lodge, The Lodge of Perfection No 8430 was opened in 1972 and on forming the Lodge, our most senior Past Master, W.Bro. J.H.Wainwright, P.P.S.G.W. was made  a Honorary Member of Perfection.


During the 500 Regular Meetings of The Halas Abbey lodge No 5407, there have been 157 members, 22 were founder members, 20 joining members, 1 re-joining member and 141 initiates. Sixty-three brethren have attained the Worshipful Master=s Chair, eight of these being founders, three of joining members and 48 have been initiated into the Lodge. The longest period between initiation and attaining the Chair was 16 years when W.Bro.J.J.Penny became Master in 1953. The shortest in 1941 being W.Bro.S H Davis.

The 50-year Golden Jubilee celebration of the Lodge was held on the 8th May 1983.

During the 1990s the Lodge was charged by Provincial Grand Lodge to raise charity for the Year 2000 Charity Festival. This proved an arduous task for the members, but with determination and leadership from W.Bro. P F Masters, the financial targets were met. The charity collected by the Lodge over the period of 500 meetings is estimated at £50,000.00.

The Lodge, originally formed by 22 Founders in 1933 is now a Lodge of 29 members, during its lifetime being larger, but now settled into a pattern which reflects the modern age of smaller, but just as enthusiastic Masonic Lodges. The signs are of a continuing interest in Masonry in a world of ever increasing divergencies and  activities. The future for the Lodge looks good. 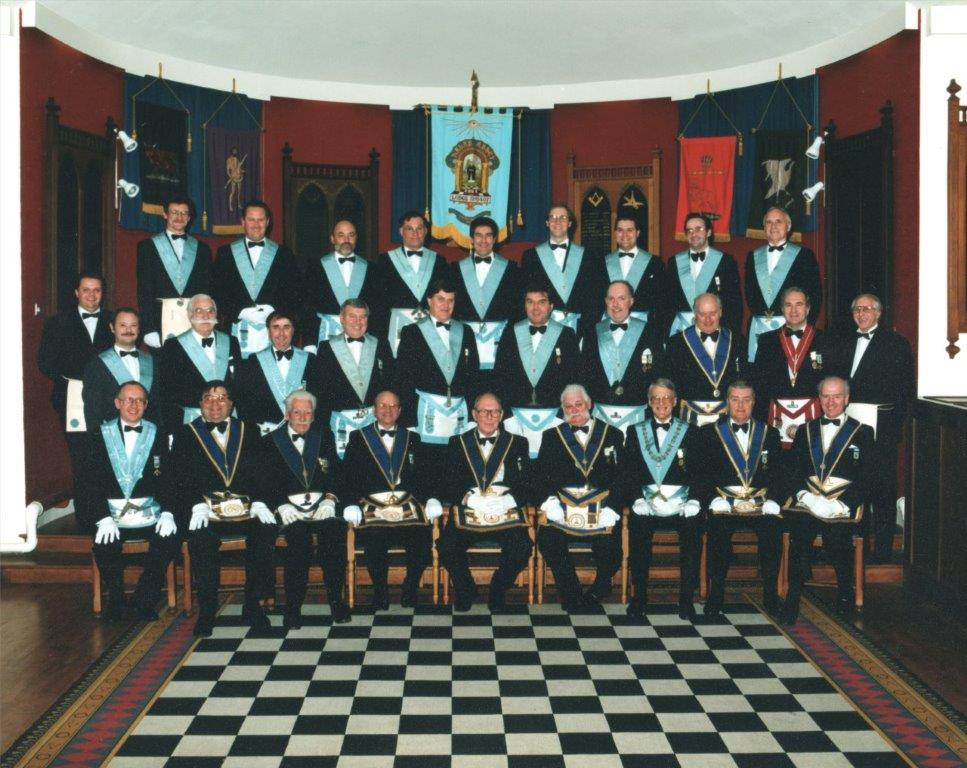